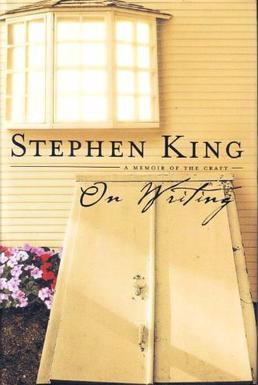 Several months back I read Stephen King’s “On Writing”, a memoir the literary giant wrote in the late 90’s and published in 2000, a year after a motor vehicle accident that landed him in the hospital. It was that near-fatal incident that pushed him to open his drawer, finish “On Writing”, and deliver it to the masses.

While labeled as a memoir, it is at least half as much a guide to writing. Undeniably one of the most successful fiction writers of the 20th century, Mr. King has a wealth of knowledge to share with us scrubs trying to figure the craft out. In “On Writing”, he took a rare break from fiction to detail some the trials, tribulations, and successes of his writing career. Written in a tone of sincerity and transparency, he lays his thoughts bare so we can learn from the deep pool of his experience. He never crams it down our throats, nor does he say ‘it’s my way or the highway’ – instead, he remains humble yet straight forward in his delivery. This style, combined with writing tips and personalized anecdotes about King’s life, make the book not only a worthy read, but also a distinctly educational and entertaining one.

As I was reading, I highlighted some of the parts that really hit home. May they inspire you as they did me.

On Rejection: “By the time I was fourteen the nail in my wall would no longer support the weight of the rejection slips impaled upon it. I replaced the nail with a spike and went on writing.”

On Word Choice: “The adverb is not your friend… I believe the road to hell is paved with adverbs, and I will shout it from the rooftops.”

On Structure: ““I would argue that the paragraph, not the sentence, is the basic unit of writing—the place where coherence begins and words stand a chance of becoming more than mere words.”

On Sincerity: “Let me say it again: You must not come lightly to the blank page.”

On Support: “Writing is a lonely job. Having someone who believes in you makes a lot of difference.“

On Purpose: “Writing isn’t about making money, getting famous, getting dates, getting laid, or making friends. In the end, it’s about enriching the lives of those who will read your work, and enriching your own life, as well. It’s about getting up, getting well, and getting over. Getting happy, okay? Getting happy.”

On Adversity: “I have spent a good many years since―too many, I think―being ashamed about what I write. I think I was forty before I realized that almost every writer of fiction or poetry who has ever published a line has been accused by someone of wasting his or her God-given talent. If you write (or paint or dance or sculpt or sing, I suppose), someone will try to make you feel lousy about it, that’s all.”

On Integrity of Self: “If you intend to write as truthfully as you can, your days as a member of polite society are numbered.”

On Perspective: “Sometimes you have to go on when you don’t feel like it, and sometimes you’re doing good work when it feels like all you’re managing is to shovel shit from a sitting position.”

Have you read “On Writing”? Do you have a favorite passage or quote that inspired or pushed you as a writer? Share here or on social media, and thanks for reading!